About a week ago I heard a feature of NPR in which a restaurateur discussed his holistic approach to serving organic food. Tomatoes were popular on his menu and since tomatoes require a good deal of nitrogen to grow, he co-planted legumes with his tomatoes in the dedicated restaurant garden, in order to maintain the nitrogen balance of the soil. He said that if he were to serve tomatoes, he needed to serve legumes in the same meal to ensure that wastage didn’t occur. A similar practice was observed among the Natives of the American Southwest, who co-planted corn, beans and squash which formed the basis of their diet. This arrangement balanced soil nitrogen, conserved water and provided a “Complementary” food diet, making the major nutrients available.

I wondered how many people today and in this nation, think about using something because it occurs as a byproduct, or “coproduct” of something already in use. I’ve tried to do this sort of thing for many years. For instance when I make beer I try to get my egg-layers to eat the non-alcoholic, high-protein mash. When I’ve made Gluten from wheat, I’ve tried to find ways to use the starch and fiber which are left over from the sticky protein extraction process.

Villages, then towns, finally cities developed largely because farmers were sufficiently successful in tilling the fields to make it possible for some people to leave the farm and take up crafts. Since it was easier for everybody to go to one place to find most of the crafters in the area, communities tended to develop. We’re still doing that sort of thing today with our industrial parks and our Silicon Valleys etc. When people moved away from the natural interactivity of the ancient farm however, production processes became more and more isolated in the sense that individual processes operated more or less in isolation and did not necessarily feed back into the overall ecology which keeps the planet alive.

While a tree cut down on a farm might be burned for winter fuel and the ashes put into the soil to grow perhaps corn or cabbages, a tree cut down and hauled to the city to make a table for instance, might yield it’s best heart and sap wood to the artisan while bark, branches and shavings might molder in a pile or if burned, might never again reach the soil. These processes have progressed to the point that a modern farm may send away all of it’s produce to a foreign country and be fertilized with ammonia generated from petroleum or natural gas. The land is merely a stopping place for material streams to touch down and interact for a time.

The problem with this is that “Balance” is virtually impossible when there is no real concept or practice of “Residency” keeping materials at the point of origin to whatever extent is possible. Ideally the restaurant should not only be located by a garden/farm but should water the garden with dish water and provide composting toilets for pa 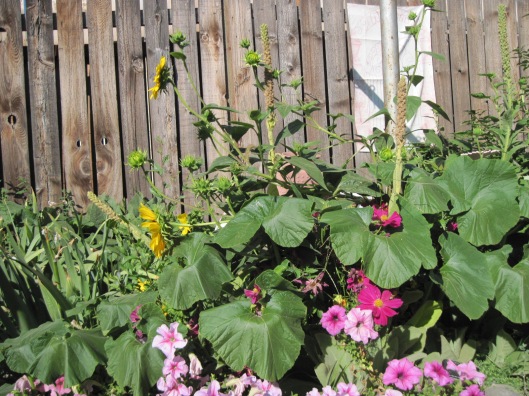 In order to take advantage of distributed energy such as sun and wind and to slow the loss of vital minerals, I think we must think in terms where possible, of small businesses/factories/shops which either recycle their own scraps, either making a secondary product or exchanging with neighboring businesses. An example of the first option is a business in Western Washington, near Mount Vernon, where cow manure is anaerobically fermented to yield methane gas for fuel and liquid effluent for agricultural fertilizer. Some cellulose residue is left over from the process and this is dried and pressed into biodegradable planting pots. If an alcohol operation can’t suitably process it’s grain residue then a feed producer or bakery might be enlisted. Carbon dioxide given off by the fermentation process can feed a green house. Even a coal-burning power plant, generating millions of kilowatt hours of waste heat per year, might heat an algae pond or evaporate seawater.

No these ideas aren’t new nor are they simple but if we wear cotton, do we find a use for cotton seed oil? If we use wood for fuel do we see to it that the ash returns to the soil—somewhere? If we grow a lawn do we even consider feeding the grass clippings to chickens, cows, anything? Obviously we won’t always know what else is produced along with something we’re used to consuming or which things are consumed to make that thing we use but we can find out and even in so doing, we become more aware of how the system which supports us all works and become more sensitive to the complexities upon which we depend.